In a CNBC interview this morning, Paul Tudor Jones emphasized that he likes BTC due its certainty, stating:

I like bitcoin. Right? Bitcoin is math. And math has been around for thousands of years. And two plus two is gonna equal four and it will for the next 2000 years. So I like idea of investing in something that's reliable, consistent, honest, and 100% certain. So bitcoin has appeal to me because it's a way for me to invest in certainty. 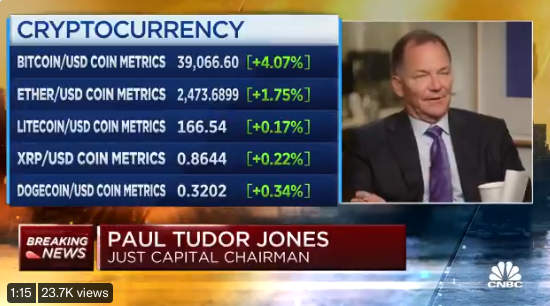 He went on to contrast bitcoin's certainty with the Federal Reserve, and US politics:

Finally, Mr Jones suggested a 5% bitcoin position as one of the few holdings he has sufficient conviction in given uncertainty surrounding Fed policy:

I like bitcoin as a portfolio diversifier... The only thing that I know for certain is that I want to have 5% in gold, 5% in bitcoin, 5% in cash, 5% in commodities, at this point in time. I don't know what I want to do with the other 80%. I want to wait and see what the Fed's gonna do, because what they do will have a big impact.